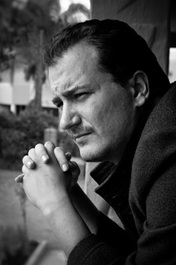 A friend told me that I should use the “about me” space on my website to sell myself.

“Good thinking,” I thought, “What better way to gain fans and gather readers then to demonstrate how likable, warm and inviting I am in a delightful little anecdote.”

So I started writing. And it hit me. I’m not likable, warm or inviting. In fact, I might possibly be a borderline reclusive misanthrope with all the appeal of a serial killer. Some of my writer friends, on the other hand, are genuinely likable socialites, the kind of people who can walk into a room, mingle, have laughs, and make so many new friends that their Facebook profiles looks like an episode of How I Met Your Mother. I’m not that person. If I walk into a room and manage two or three conversations that don’t end with the other person looking awkward, I feel I’ve made a pretty substantial achievement. This, indecently, is also probably why I struggle to get that long yearned for break into the writing world. I’m simply not a very marketable personality. Between my chain smoking, coffee addiction, and general avoidance of getting involved in “good causes,” my appeal to the mainstream is not outstanding. I am, in a nutshell, the kind of person that can kill a conversation on a Facebook thread by attempting to take part in it.

“So,” I asked myself, “what could I say that would make people like me.”

I pondered long and hard.

“Of course,” I gasped, an epiphany exploding in my head like a fireworks display, “I’m a part time drama teacher! I work with children! People love that kind of thing!”

So I began to write up an “about me” that made liberal mention of how I shape young minds, share knowledge of the acting arts, and selflessly give of myself to the world’s youth. How I trade cigarettes with the students after class, and bribe them to spy on the lady ballet teacher next door, so I may know when she is most vulnerable and likely to finally cave to my advances. How I fight with the school principle, because the jackass believes school drama productions can be slapped together overnight. And how I conflict with almost every other teacher, due to my insistence on pulling students from “more important” classes because I need them for rehearsals.

“No,” I quietly admitted, “Likely not the best ‘about me’ either.”

I would like now to share a real story, in all seriousness, because I feel it sums up my personality and place in this world. And it can stand as my “about me,” for the sake of honesty.

I attended primary school in the small South African town of Midrand, located halfway between Johannesburg and Pretoria, or Tswane, as it is now called. I still live in this small town, although it has grown immensely since my youth.

During PE lessons the two classes in Halfway House Primary would often be pitted against each other in one or another sport, the day in question being football. I would always stand at the back, by the goals, during football, because I could claim to be defending and avoid any real activity. I never had much interest in sports, despite being constantly told I had the perfect physical build for it. (I’m tall.)

On this day the apposing team took a shot at goals and managed to make the ball bounce between the crossbar and ground, in a rather amazing series of quick ricochets. The ball did not obviously go in, and the predictable “it was in, it was out” argument followed. The tradition in these cases was for the captain of either team to call on their players individually, each of which would insist on agreeing with his point of view.

Captain says; “It was in! Andrew, Andrew, what do you think?”

Andrew steps forward. “I thought it was in.”

I had seen it happen before, and knew that the rest of the PE lesson would be lost to this ridiculous display, which was, let’s be honest, nothing but a popularity contest between the two captains. (They were the most popular two boys of either class. Of course, why wouldn’t they be?)

So, when the captain called on me to agree with his point of view that the ball had been in, I simply, causally, said that I agreed with the other captain, and that it had had been out. The expressions of disbelief said I’d suddenly sprouted an extra head. I had dared defy the unspoken rules.

Why did I do it? Because I knew the game of football would go on, the reason everyone was there, and that the alpha male peacock fighting would end. And, as I’m sure you can imagine, the act won me so much love, admiration and popularity from peers that I was carried off the field while everyone cheered my name. Or, I was shunned so hard I barely made it out of school alive. One or the other.

That is the person I am; the guy who honestly and truly believed people would appreciate my ending the peacock fighting so that the football game could go on. Only as I matured and learned more about the “way of things” did I realise how foolish I had been; the world needs its peacocks.

(Just for the sake of a laugh, though, picture this. I played Romeo in the school production of Romeo and Juliet later that same year, opposite one of the popular girls. Imagine how well that went down, me being that kid that everyone admired so deeply for defying the “way of things.”)

So, summing this all up; all I ever desired was the freedom to write, earn a living from it, and maybe get a few emails from readers as validation. Not lie about my interests, pretend to feel strongly about issues, fake smiles, and feign to be some inspiring, wise soul. I write because I love it, and feel I’m good at it. I hope at least some people will enjoy my writing, or better yet, love it. If they don’t, that’s fine as well, I’m not for everyone, I’ve come to accept and embrace that. But, I know there that there are many out there who likewise roll their eyes at the peacocks, refuse to follow the “way of things,” simply because its what everyone else does, and like me, don’t have Facebook profiles that resemble How I met Your Mother. I write for those people, because glittering vampires with six packs are also not for everyone.