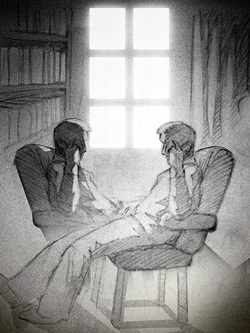 Cynical and sarcastic, bad tempered and angry, writing the personality of Jet Clarence was nothing if not a major balancing act; one which I hope I have achieved. It is never easy to have a character so verbally unhappy for a large percentage of the book and still be likable, and in the case of Jet I attempted to offset his negative perspective with as much humour as possible. Whether I achieved a good balance or not is of course up to the reader, but I am hugely pleased (and somewhat relieved) to have received a lot of positive feedback from a variety of sources.

At his core, Jet is simply a young man who is living a life with which he is deeply unsatisfied. His chosen career is less than he hoped for and his once beloved family is a shadow of its former self, so really, what is there to be happy about?

Some might argue that a positive attitude is the key to happiness; that learning to find the silver lining in life is akin to achieving enlightenment, but Jet is the kind of person who will show such suggestions the middle finger and rather take pleasure in loudly expressing his dissatisfaction.

Personally, I kind of know how Jet feels, and I don’t think I’m the only one. There are times when no amount of positive thinking, pleasant words and calm logic can dispel dissatisfaction, and Jet is a personification of these common feelings. Everyone can relate to a need to just slap life in the face and declare that things are not going the way we hoped. Jet does so, repeatedly, and for all to appreciate

Of course, there is more to Jet than just his cynical nature, such as his unstable relationship with his mother and his growing distress at what has become of his family. This aspect of his personality may be less widely relatable than dissatisfaction with life, but I’m more than willing to bet that with today’s ridiculously high divorce rate that more than a few people know what it’s like to have a broken family. In the case of Jet, seeing an apparently deadbeat alcoholic where his father used to be is not an easy pill to swallow.

From the base of this family dynamic comes Jet’s increasingly volatile temper and tendency to act in violence. This behaviour is something that often does stem from a difficult family life, and in the case of Jet I have explored this via his growing, potentially destructive Spirit Level.

Apart from the very human side of Jet, there is another part I wanted him to play, and that takes shape in the “see the magic just below the surface” thread of the book. I wanted Jet to not only be real and human, a flesh and blood person with which the young adults of today could relate, but also a voice that loudly declared some of the unspoken, unacknowledged little truths of the world. All those little rules and facades that sit just below the surface of everyday life and pretend they are not there, I wanted Jet to point a finger at them and say “Look! I see it! It’s there!”

If I can be clearer; I wanted Jet to draw attention to the little games played with our minds in places like casinos and shopping centres, or on billboards and in the designs of over compensatory car designs. Or the kind of logic that says people with money are more likely to have the law sway in their favour, simply because they are able to afford better legal services, but simultaneously we are still told that all are equal in the eyes of the law. That kind of “magic.”

Obviously, Jet’s growing alertness to the “magic” of the world in which he lives serves also as an indication of his deeper understanding of his own abilities, but I hoped he could say a few things about our own world in the process.

Of course it is impossible for a character to be liked by everyone, no matter how much a writer wishes it to be true, and at the end of the day you can only ever appeal to a certain percentage of the world. I hope that Jet says a little something to everyone who reads Balance, young or old, reading enthusiast or casual book dabbler. 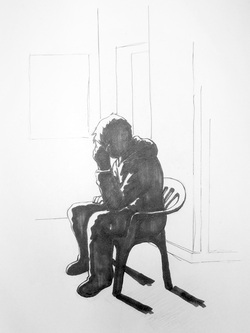 It’s obvious that many aspects of Jet Clarence are based on my own personality. The most straightforward being that my own father died, a tragedy that occurred nearly a decade ago and was a rather traumatic event in my life. However I must state straight off the bat that no, I do not hate my mother and no I do not wish harm upon her in any way. And if it’s crossed your mind in any way, no I also do not think that she is a manipulative, brain scrambling psycho-bitch.

People often assume, especially when you openly state that characters in your book are based on real life persons, that this means every aspect of the story is an exact copy of reality. On the contrary. Liza and Fran Clarence are two of the most fabricated in the book, with almost no similarity to my actual mother and grandmother. Only the description of Fran is vaguely based on my real grandmother, Franca.

Jet’s “power of observation” is one thing that is reflected in my own personality. However in Jet this “ability” serves a purpose, if only being a means for me to link “magic” to real world subtleties. In reality I can honestly say that being “observant” is only good if you intend on turning that characteristic into a fictional character’s quirk. IE; it’s not that useful.

Regardless I find that I spend a lot of time trying to spot things in the world that others might miss; often bizarre and completely useless aspects of various environments. Most if the time if you point these things out to people they will quickly declare that they too had noticed it, but never really cared to actually acknowledge it. It is for this reason that I refer to this things as “magic” in the book.

For example, I’m sure everyone has noticed that the bread and milk are always kept at the back of a supermarket. Why? Obviously so that you must walk past all the other groceries and be tempted to realise there was more you needed then just bread and milk. Another example is that large shopping centres and casinos are always very easy to get into, but are a virtual labyrinths on the inside, designed to keep you trapped in a consumers maze for as long as possible. And as long as we’re talking about casinos, it’s no accident that the slot machines are equipped with those enormous metallic buckets to capture the coins; all the better for the place to be an orchestra of clattering coins that declare the ease with which one may win.

Secondly, Jet’s concern for his future and despise for The Whisperer are also something with which I relate. But then, I’m guessing that a fair amount of people in the world can relate to these kinds of concerns. There is no place that The Whisperer directly relates to, but I used it as a representation for every dead end job the world over. I was not in a similar job at the time I started writing the book, but certainly I was a little anxious about my future. And still am, really. Which writer worth his salt is not worried about retirement…?

Finally Jet’s anxiety and distress about his father is probably the most directly connected characteristic to my own personality. Anyone who has lost a parent will tell you that the experience is not something from which you will escape unchanged. In fact, as I look back on who I was prior to his death, I am gazing upon a complete and total stranger. It was obvious then that I would use the life experience as inspiration in a book about “mental demons.” Ultimately, I do indeed hold the same demon as Jet Clarence; only I would consider my own to be a little more in control than his. (At least in the first three quarters of the book.) The image of the blue face is also something that is based on my own experience. It is something, I assure you, that will remain with me till the day I die and the most accurate example I can refer to as a “mental demon”. The tuxedo and red eyes are fabricated, but come from the same principal as the blue face. 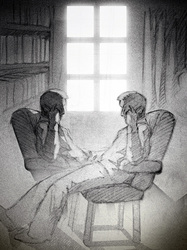 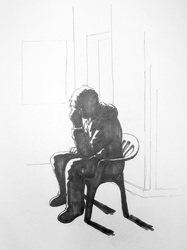 Images by Tony Head
Powered by